Today I went with the kids to see  gigantic Dinosaurs that move, roar and interact.  Field Station Dinosaurs is a must do with kids this summer, especially young dinosaur fans.  Well worth the drive to NJ from Putnam County today (9 minutes from Manhattan!).  We went with friends, the more the merrier and not knowing what to expect when we got there.  We brought lunch, snacks and drinks thankfully it was a scorcher out there.  We took a stroller which none of the kids really wanted but it held our bags, there is a lot of walking to see dinosuars and activities, carrying them would have been a pain, but you can rent strollers or lockers at Field Station too. 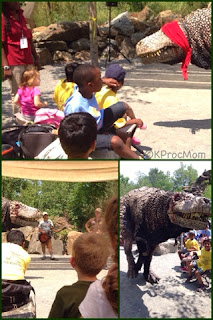 Admission is reasonable starting at $20 with option to add on a few extras and kids' 2 aged under are free to get in.   The shows were adorable, the kids participated in a music show, dancing and doing the limbo and rocking out.  We all know how much Charlotte likes to dance.  The second show included a DINOSAUR who walked around and did tricks with his trainer.  Charlotte was over the moon and wanted to ride on him and touch him.  Jack and his friend sat watching the entire time not moving unless it came close to them, they thought he was real,  such innocence. 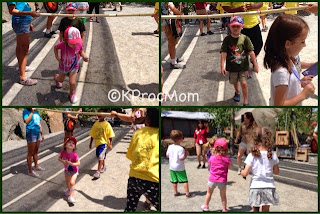 All kids get a passports that they can earn stamps for by attending shows and activities for their ultimate Paleontolgist badge that then goes on the passports.  This free and keeps the kids entertained, ours were all about the stamps.  When you are leaving, they show their passports and received their sticker. 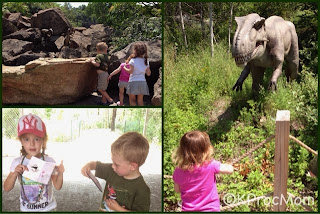 We were there almost 4 hours, and the kids had a blast, there were toys for them to play with in atent while waiting for a "game show" to start, coloring dinosaurs in another tent, and digging for fossils using tools in the sand.  Do expect the the kids to get dirty, but isn't getting dirty a major part of fun?

I highly suggest getting down to 1 Dinosaur Way in Seacucus, NJ and joining in on all the fun!  We want to go back!

Disclosure: I visited Field Station on my own, and then they provided passes for giveaway.  All opinions are 100% my own and as always honest.

Dellah said…
I love the triceratops, must be my love of watching those Land Before Times movies #80sbabyproblems
August 2, 2014 at 1:40 PM