Navigating Special Education for the kids 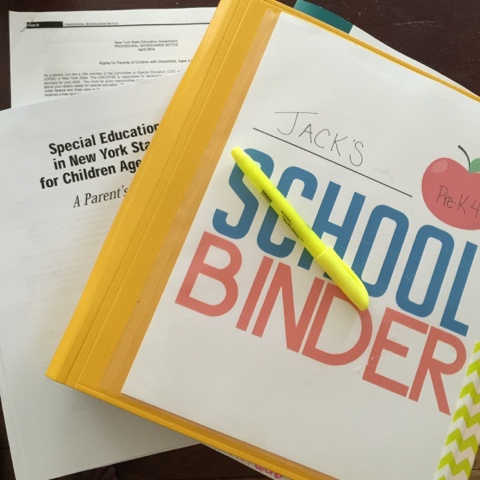 I haven't written anything about our journey with Early Intervention, CPSE and now CSE transitioning to Kindergarten soon.  I have not always been happy and there have certainly been ups and downs along with adding and taking away services. We started with Early Intervention around 3 years ago when Jack was 2 with occupational concerns for his hand.

Carmel CSD has been involved since he turned 3 with CPSE (Preschool age services).  Starting small we have added in the last two years.  Of course not when I asked for it, and we had 3 meetings this school year, and even with the last one, things took weeks to start because of services that really do not exist at the CPSE level.  I have been less than pleased to say the least.  Then comes Kindergarten and I am concerned about him transitioning to another school after the last month finally have progress, also class size.  I feel his LRE (least restrictive environment) would be staying at his current school one more year (Catholic School) and having a 1:1 aide there to help keep him focused and work with him as he is diagnosed ADHD, per the suggestion of those working with him and school district in order to receive services.

At his meeting it was determined that he no longer needed Physical Therapy, Occupational Therapy in kindergarten.  Also academically there weren't really any concerns and over all cognitively he is a smart little boy.  Seriously he continues to amaze us all the time.  It was also determined per the diagnoses that he would receive a 1:1 6 hours a day daily (6 hours was determined by the length of the school day at St. Lawrence).  I expressed my concerns and my feelings and opinions on wanting to keep him one more year at St. Lawrence as that is his LRE at this point, with the small class size and since he is used to the school, he won't have to re adjust again.   I left happy and going over to Brewster CSD since St. Lawrence is in Brewster's district.   This was all May 18th.

Today June 8, I finally reach who I needed to speak with and am informed that he cannot have a 1:1 aide per Brewster CSE (Committee Special Education).  That they can give related services at their school and I would have to transport him there, but not accommodations/modifications in which a 1:1 aide is.  Honestly I was choking back tears on the phone and once off the phone I just cried.  I have been fighting for this kid for 3 years, I am his biggest advocate and his biggest supporter and thought everything was finally going to be good for him, Kindergarten would be his year, he would strive since we finally had a plan in place and we were defeated yet again.

Jack is such a good boy, I have followed what everyone, including Carmel, has told me to do and yet defeat.  I feel they are setting him up to fail.  Mama bear wants to explode,  I mean I did everything they said to do, got him diagnosed, classified and for what?! Seriously WHAT! How are they helping my boy, how are they helping my family?  Why did I even take all this time, do all this work for Jack, for what? What is coming from it?

He is not different then any other opinionated boy, just his mom wants the absolute best for him and will stop at nothing to make that happen, give him an advantage and work with and for him.  If we never started with an IFSP for his hand, we would probably not be here today, we would not be worrying about this, it most likely would not be a thought in my head.  Everything happens for a reason though, and I would not have the job I have if it weren't for Jack, I would not be challenging other kids and working with other parents while helping them along the day.  Jack has made me the mom I am today, the better teacher I am today and the wife I am today.  Again, don't mess with mamabear.  No we are 2 days away from July and still I have no answers.  Still I am waiting.  I do know my kids are not attending the Public Elementary Schools.  So while I have never been pro Catholic Schools I do value the more individual relationships with staff and schools.  Their willingness to help and listen.

I will continue to update as the summer goes on too.