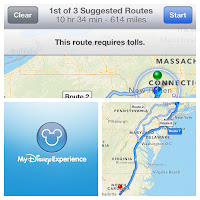 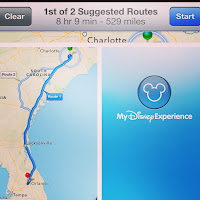 Driving: We drove down to FL with our 2 kids. We left the Bronx area at 2pm and arrived in Fayetteville, NC at around 2:30 in the morning. We checked into a hotel. 2 ideas here: 1- We were bound to our hotel at that point because we had paid, canceling would have charged us so we chugged on until we reached there. If we weren't stopped in 3 hours of traffic in VA it wouldn't have been a big deal but we moved 10 miles in 3 hours and it messed up our timing. 2-  If we didn't have a hotel booked in advance we could have stopped anywhere and called it a night. We took out own advice on way home, we drove as far as we wanted (Orlando-Ashland,VA which was north of Richmond). We checked in at 12:30am passed out and woke up, ate and left by 10:30am. Breakfast was included, beds were comfy and room was under $90 a night: Country Inn by Carlson apart of the Radisson hotel chain. It was nice that we drove as much as we wanted and stopped when we wanted so we didn't have to push ourselves.

For the kids (what made our life easier):

I am super organized so the kids had matching SkipHop sets. Each had luggage bag, backpack, lunchbox and water bottle. Our themes Owl (J) and Bumblebee (C). In the back packs each were filled with toys for them, some Disney themed items of course and books. Whenever they were bored or right before they would fuss I would pull one out, new look of amazement each time. Win-win for no meltdowns. 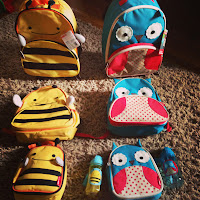 Snacks- cereal bars, animal crackers, goldfish, cereal, peanut butter crackers and squeeze pounces. No candy!! Then I brought a pack of juice boxes which (we wound up bringing most home) and a case of water to fill up their sippy cups whenever they asked.

Electronics (iPad/games/iTouch): We have about 7 videos on our iPad, so we would play one every 3 hour. Then we would stop when movie ended to let the kids stretch, this system worked well. Also when One would sleep the other could play games. We also have the Mobigo2 and J got a new game for Easter which wasn't opened until the car ride, so he had another new thing to play with. C plays with the game unit, more like she presses buttons and giggles.    I did buy VTech headphones for J to use, but he wouldn't wear them plugged in but would unplugged, silly kid. Also, we turned my old iPhone4s into an iTouch with all their games loaded and ready to play, both kids like to use that. My car has 2 extra plugs in 2nd and 3rd rows making it easy to charge everything when we needed.

Extras: I kept spare clothes for the adults and our toiletries in a bag that we had easy access to so when we did stop I could reach anything I needed (meds, soap, toothbrushes, etc).

Kids: I used ziplock bags to organize their clothing options daily, and each had a bag for bathing suits, socks and PJs separately. Daily I coordinated an outfit for each in one bag, making morning dressing very easy for us, and easy to through a spare in our diaper bag incase it was needed. I fit all this into 2 SkipHop rolling backpack luggage sets: 10 days of outfits, Spare clothing pieces, socks, PJs and the bathing suits. Talk about condensing luggage. Their shoes and coats did go in my luggage with my shoes, sweatshirts and beach towels. I couldn't fit everything. 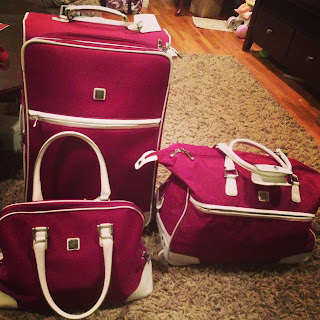