Our Movie Screening of FROZEN

Jack and I were invited to preview Disney's 53rd Animated Film FROZEN on Monday, it was awesome.  Jack was glued to the screen the entire time, eyes only leaving the screen for some popcorn. Disney's latest film has two female leads, one playing a hero/villain combo, still dominating the story line.  This latest movie is a loose adaptation of Hans Christian Anderson's The Snow Queen, full of mystery, excitement and the expected princess singing and dancing scenes.    Jack already cannot stop singing the chorus to Let It Go, which for only seeing it one time, and at 3.5 years old, is pretty good and catchy.  We both would crack up at the comic relief Snowman named Olaf. 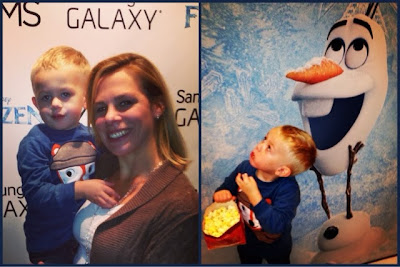 The movie starts off with two young sisters Anna & Elsa playing around, Elsa has magical powers that turn things into ice and snow.  Elsa leaves and Anna vows to find her, and the story continues.  When we got home, he told his little sister he is going to take her to the best movie, called Frozen.   Grandma, Daddy, Preschool and basically anyone he encountered all heard about Frozen.

"Holy moly it's like FROZEN outside" -Jack Tuesday morning when he saw the snow outside.   Overall I am pretty impressed by the lasting impression the movie left on him, he is young, his attention span is short and like I said he latest the whole time, remember a tons of details from it and repeating things very accurately to our family and friends.  That's not something he does after only seeing a movie one time.   Overall Jack and I give the movie 2 thumbs up and have plans to see it again with Charlotte and Grandma.

Some Q&A with Idina Menzel and The Moms.  Jack was adorable, he was standing up with his hand up each time they asked who had a question… His question, "Did Queen Elsa have fun ice skating?"/  I am sure she did Jack! 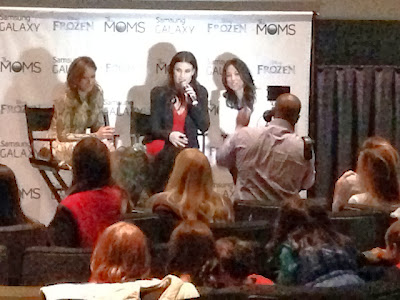 
SamsungMobileUS was also at the screening with two of their latest products for the kids to play with and make a snowman drawing and tweet it for a chance to win.  We used the Samsung Galaxy Tab 10.1 2014 Edition, Jack was fascinated by the pen he could use to draw, not something he is used to.  Going home he asked for one of them for Christmas.  I think he will have to wait, but maybe Daddy needs a new tablet?  They also have a tablet for kids J tested out an app to make a snowman on it, much smaller for easier handling in their small hands, Galaxy Tab 3. 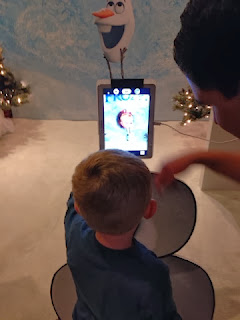 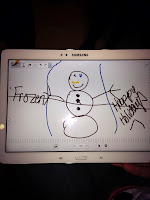 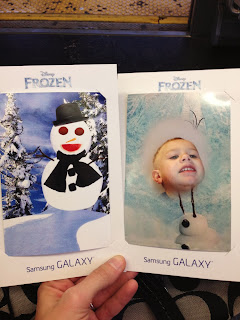 ** Disclosure: This is not a sponsored post.  All opinions are 100% my own. The Moms provided me with the private screening.**
Labels: Disney Family FrozenMamarazzi movie NYC pictures reviews